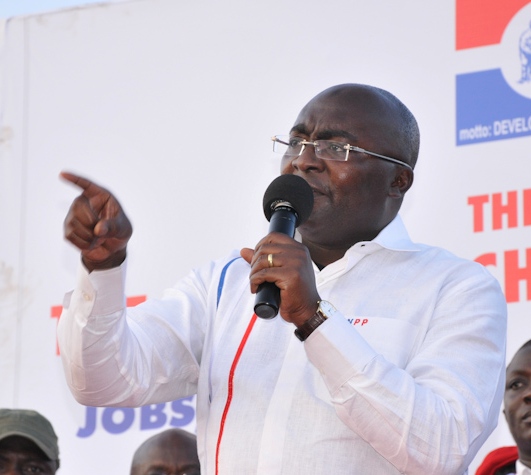 The Vice President has announced that the government will not legalise Okada business.

According to him, though it’s a tough decision to make, the government has had to take this approach in the supreme interest of Ghanaians.

Speaking at the joint launch of a strategic collaboration between Volkswagon & Blackivy to outdoor Volkswagon’s new assembled cars in Ghana, Vice President Dr. Bawumia said: “I know that there’s been a recent discussion about Okada in Ghana, I think that in the context of what we are doing we will rather encourage the okada riders to come in and try to lease these vehicles so that they can run businesses.”

“They need to graduate from this risky and less safe okada riding to a safer means of transportation. Their problem will be a lack of capital but if you bring in new leasing policies and we have our national ID cards with our digital addresses we can have a credit system working and give you an option other than this risky job.”

He added: “You don’t want to finish driving school and then make a life in okada riding. You can have a better option and we’ll give you a better option. So, yes, we will not legalize Okada business. It may be a tough decision but it is in the interest of Ghanaians. We have had discussions but we will stick to our decision to provide a better alternative to okada riding. Let’s give them an opportunity to lease vehicles and pay over time.”

Meanwhile, the Minister for Transport, Kweku Ofori Asiamah, recently revealed that the government had already started a consultation on the possibility of legalizing the commercial motor-bicycle transportation (Okada) before former President John Dramani Mahama made his promise.

But Mr. Ebo says the comments by the Vice President is in sharp contradiction to what the Transport Ministry told Ghanaians.

He said the modalities and the feasibilities on this approach announced have not been done and also dangerous for the political fortune of the NPP.

Mr. Ebo indicated the demeanour of the second gentleman of the land shows that the government has not done enough work on what Dr. Bawumia announced.

“when are we going to register all Okada riders for the Ghana card and roll out this policy? And so, they should take what Mahama has said seriously,” he asked.

He argued some countries have successfully commercialised Okada with several women in the business, adding “if other countries have done it, why can’t we do it? We should look at it very well. Whether you like it or not, Okada has come to stay.”

He disclosed that an NPP executive in the Eastern Region has donated 30 motorbikes to party supporters despite questioning the rationale behind the commercialization of the Okada business.

Mr Ebo also asked how many people “can get access to the cars the Vice President talked about. Dr. Bawumia hasn’t thought about this carefully and the party has also not thought about it. The government should rethink about this Okada business”.

Going to court is a waste of money – Henry Lartey...