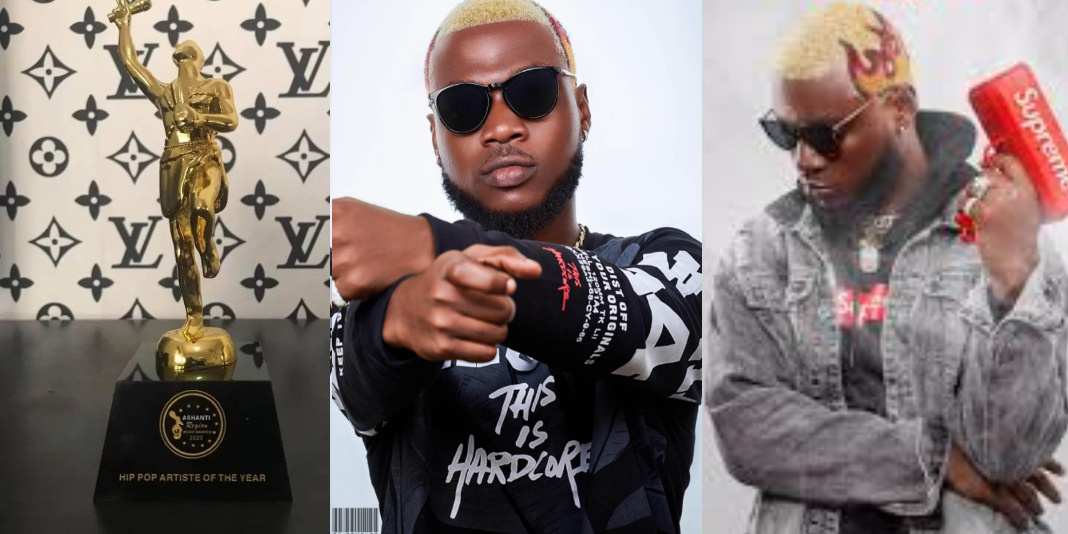 Fast-rising Kumasi based musician, Phaize Gh has made his fans proud by  winning Hip hop Artiste of the Year award at the just ended Ashanti Region Music Awards 2020.

He won the award with his song ‘Money Dey’. The song after its release on Jun 17, 2020 has seen massive airplays in Ghana especially the Ashanti Region and its environs.

Phaize GH’s song was nominated along side Kyenku by Kawabanga, Sore by Yaw Tog, Awake by Kweku Flick, Lific’s Hague Sika, Ypee’s Kumerica, Zionfelix’s song titled Kumerica, Dabro by Braa Benk, Bossu by Strongman and In the City which is also the song of Kofi Jamar.

The three tough songs in the category were Sore by Yaw Tog, Awake by Kweku Flick and then Phaize’s Mondey Dey.

Amoah Donkor a.k.a Phaize Celebrating the win via Facebook posted a photo of the plaque and wrote: “GOD BLESS Y’ALL FAM❤️
ARMA HIPHOP ARTIST OF THE YEAR 20🔥”

Phaize GH is one of the best emerging musicians from Ashanti Region.

He is one of the young musicians from Ashanti featured on ‘Ahodwo Las Vegas’, a song by Shatta Wale off his ‘Kumerica Invasion Project’ agenda.

“I Am Highly Disappointed In 3Music Awards” – Bosom PYung

UER: Invest in award schemes to encourage individuals and organisations to...